The question of how to feed ourselves is really a question of how we should live, explained Carolyn Steel, who took delegates at Healthy City Design International 2018 on a whistle-stop tour of how food shapes our cities and social culture.

From Sir Thomas More’s fantasy world, Utopia, to Ebenezer Howard’s Garden City, many visions in human history of how we should live have food at their heart. First, she took delegates back to Ancient times, explaining how Aristotle’s coining of the term “political animals” aptly describes the urban paradox the world has faced for centuries.

“If we’re political animals as humans, that immediately describes the dilemma,” said Carolyn. “We’re political, so we need society, other people, which means we need to live together as groups – in cities [for example]. On the other hand, we’re animals, which means we need the natural world, and food is what reminds us of this fundamental dilemma, because the city isn’t where our food is produced; it comes from somewhere else.”

During the time of Aristotle and Plato, the term ‘Oikonomia’ – meaning household management – became the prevailing notion of urban planning. Said Carolyn: “The ideal arrangement for any city is that everyone will have a house in the city itself, and they would have a farm in the countryside. And then lots of farms and lots of houses would come together and make a self-sufficient polis (community). 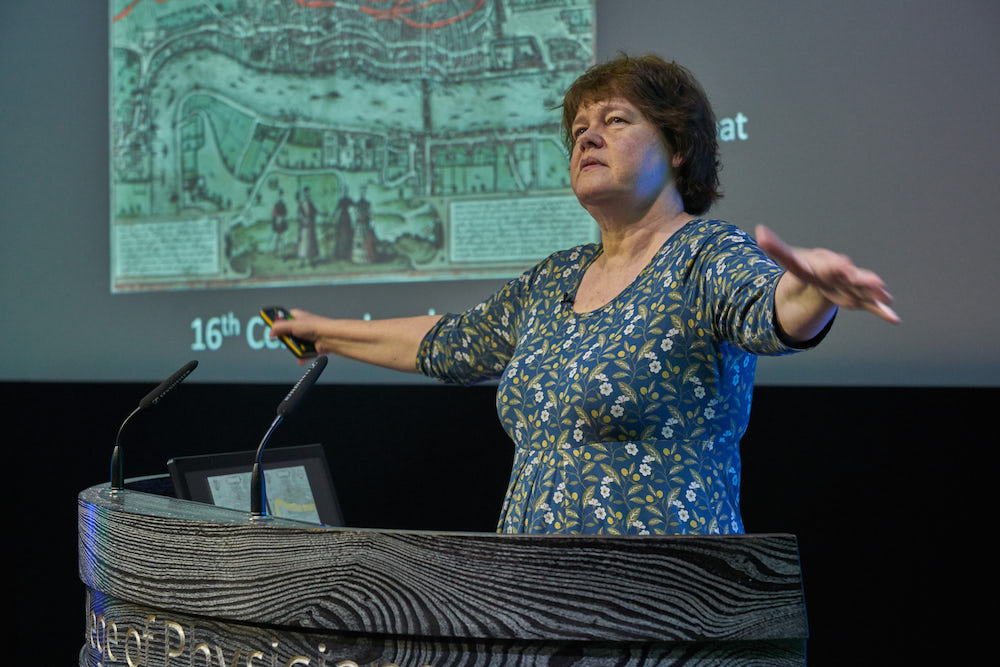 ‘Economics’, she explained, is derived from ‘Oikonomia’, but it has come to represent something that Aristotle warned against: the idea of making money for money’s sake – that is, rather than concentrating on feeding yourself, you endlessly try to consume more and more until the balance between the city and the countryside explodes.

While most ancient cities followed the oikonomia model, Rome was the first to head down a different path. By the first century, it had about 1 million citizens and couldn’t feed itself in the same way with a local hinterland. Instead, having embarked on a series of conquests of Sicily, Sardinia, Carthage and Egypt, it began to import food in from such territories to feed itself.

The next major change in how cities fed themselves occurred with the emergence of the railways.

“Three key things changed at this point,” explained Carolyn. “Cities are emancipated from geography – for the first time, it’s possible to transport food over long distances, so they can now be built anywhere and in more or less any shape. Secondly, food becomes invisible because it starts to travel down specialist logistical routes. Last but not least, politicians, who up until this point had been trying to control the food system and feed the city directly, wiped a collective brow and said ‘oh, fantastic, we can leave this up to the food industry now’.”

Mass industrialisation of the food system

With growth of the city came a diaspora of food logistics, while the agricultural hinterland expanded and triggered large-scale transformation. A global grain glut was the result, which led farmers in the American Midwest to respond by feeding the grain to animals.

Said Carolyn: “What this created was a world-first: cheap meat, and it went to the urban markets via the chill chain invented by the meat packers. It was an ecological catastrophe.

“If you replace what is grassland with mono-cultural annual crops, the soil loses its structure gradually, and loses its nutritional value and stability to retain moisture. This led to the dust bowl, soil storms essentially, where the top soil in the American Midwest blew away – and it’s never really regained its strength.”

While the organic movement has grown out of a response to the cheap meat phenomenon, increasing urbanisation and faster lifestyles, along with stubborn and powerful vested interests, have helped engrain the cheap food model in Western culture. Yet this system doesn’t really exist, explained Carolyn, who pointed to some of the associated externalities of it, including: massive loss and degradation of farmland; global greenhouse gas emissions linked to industrial farming and livestock production; huge food waste; and the extinction of many species.

Today’s global cities, said Carolyn, are now far removed from the ideas championed by the likes of Aristotle, Sir Thomas More, and Sir Ebenezer Howard, who all advocated keeping the city small, and maximising the relationship between the city and the countryside. And she tore into the notion that we all need to move into cities, intensify industrial farming, and leave half the world alone – a polarised theory and vision that, according to her, fails to answer the urban paradox that a city cannot feed itself from within.

Suggesting a few ways by which we might fight back against this onslaught, she called for a revaluation of food and efforts to break its monopolistic control: “That means we need to work with nature as opposed to against it to produce food,” she said.

Other policies might include: designing measures to draw the countryside back into the city; putting food directly into the planning process; co-producing food – for example, through community supportive agriculture; growing food on roofs; and, generally, improving the visibility of food as a means to bring people together.

She concluded: “Food is a fantastic, powerful and connective force that shapes our lives, and I offer it to you as a way of seeing many of the dilemmas we face, and, fundamentally, answer the question of how do we live well as a political animal together in a space?”

Organised by SALUS Global Knowledge Exchange in collaboration with The Helen Hamlyn Centre for Design, Royal College of Art, the Healthy Cities Design 2019 International Congress & Exhibition will be held at the Royal College of Physicians, London, on 14–15 October, 2019.