The health sector has already made substantial and positive contributions in addressing the climate crisis through greening hospitals and healthcare facilities, but too much of its work is still taking place in silos.

Carlos Dora, a medical doctor and epidemiologist, and current president of the International Society for Urban Health, offered the above prognosis as part of his keynote to conclude this year’s virtual Healthy City Design Congress.

The final plenary session, chaired by Sunand Prasad, UK Green Building Council chair and principal at Perkins&Will, also featured a panel to discuss whether the upcoming COP26 UN climate change conference represents the “last-chance saloon” to prevent dangerous global warming, and what targets and actions the health and urban design community should prioritise.

Elaborating on the problems with silo thinking, Dora said: “People who are working in heart disease and stroke work in parallel to people who work in old age or the health of children or infectious diseases. And you see with Covid, we’re good at vaccines and secondary prevention but we’re very poor at recommending clean air in open spaces. And that’s because we still operate in vertical silos within the health system.

“Out of COP, I hope the health sector will be able to integrate more within the health system and come up with coherent primary prevention strategies for all of those things and for climate, which is the greatest challenge to public health now and in the future.”

The health system, he suggested, could be learning more from architects and planners –not least through the capacity of professionals in those fields to think ahead, visualise and embrace different ways of “engaging with people’s imagination in capturing aspirations”. And making connections with anthropologists, social scientists, and people working in human rights, with indigenous groups and on worker rights, and in lower- and middle-income countries would also address an important knowledge gap. 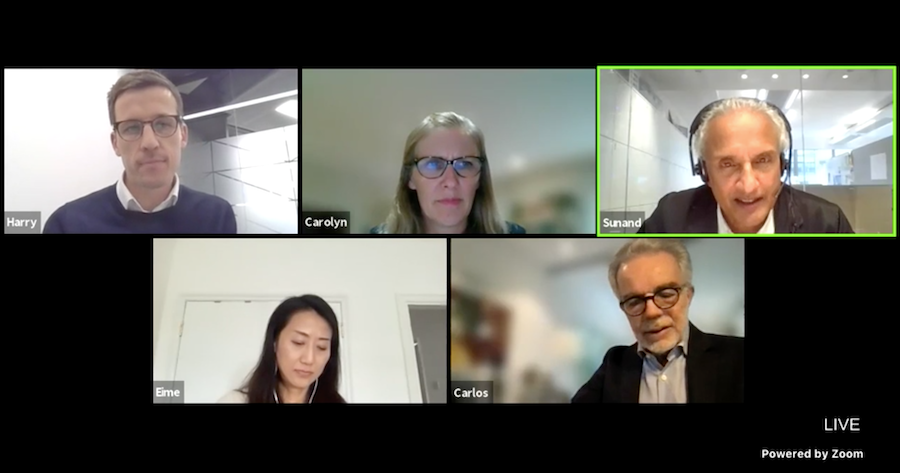 For Dora, there are three areas to focus on: place and placemaking; migration, job creation and youth; and justice – feminism, black lives, indigenous groups. But he questioned where the platforms are to help make those connections. Where is the glue that brings all relevant professions and stakeholders together to “close the doughnut?” – a reference to English economist Kate Raworth’s concept of ‘doughnut economics’ – he pondered. He sees a lot of creativity happening already but believes that what is needed most is a model of local platforms and exchange, made possible through digital technology.

“What I’d like to see is for us to reach out in lower- and middle-income countries, and in secondary cities, to develop the models,” he said, “using the experience that we have everywhere to build in a connected way.”

Harry Knibb, development director at Oxford Properties Group, also highlighted three courses of action to help address climate change and accelerate progress towards net zero. The first is to do a better job of steering capital towards the Sustainable Development Goals.

“The current financial system we have drives capital based on certain risks and incentives, and it’s time we updated those risks and incentives to reflect the reality we’re all facing,” he argued. “We currently produce around 34 bn metric tonnes of CO2 per year and we have innovators and technologists looking at developing solutions to abate a tonne of CO2 for $100. So, assuming they can reach that target, we need $3.4 trillion a year to reduce CO2 emissions that we produce every year, assuming they don’t rise and fall. That’s huge, but one thing we’ve seen in the last 18 months is that that sort of scale of deployment was spent globally – around $9 trillion – in response to Covid, so we’ve proved that it’s possible.”

Another key issue, he said, revolves around defining topics and the confusion that can arise from too many frameworks. The result of that complexity not only slows down organisations’ ability to act, because they’re unclear about the direction in which they are meant to point, but it also creates difficulties in making comparisons and benchmarks. The problem then, he said, is that “you don’t drive improvements through competition, and competition is a very powerful tool”.

Rectifying market failure is a third challenge for Knibb. While he agrees that markets, on the whole, work well in allocating resources through pricing mechanisms, they fall down when items sit outside of markets, such as biodiversity, ecosystem services, or the atmosphere.

“If these run into short supply,” Knibb explained, “price doesn’t rise but we continue to consume, and there is a danger that we go over tipping points. So, the challenge here is: how do we correct those market failures, either through pricing mechanisms or regulation?”

Eime Tobari, a social value strategist and founder of consultancy COCREATIF, emphasised that health, climate, social equity, and so on, are not trade-offs but are interconnected. She advocated an outcomes-oriented approach, where the issues are defined, the vision is agreed, and the desired destination is clear – but to achieve this will require collaboration across different sectors and different expertise, as well as a systems approach and long-term stewardship.

Offering a nuanced view of the problem with silos, she said: “We’re talking about breaking silos, yet silos are there to organise things; they’re quite logical. You divide into different groups of expertise and then you organise according to those. What we’re discovering is that’s not sufficient. There will still be benefits in organising in that way but we also need to break silos and be flexible in the way we work. So, the holistic approach might seem messy but it’s also a mature way of dealing with things. We’re in a transition at the moment but there is hope in moving to that mature way.”

Carolyn Daher, co-ordinator of the Urban Planning, Environment and Health Initiative at the Barcelona Institute for Global Health, stressed that “the how” is what is really lagging currently – and there needs to be more focus on behavioural change rather than technological innovation.

“There are a lot of administrative and regulatory barriers that need to be addressed very quickly and in an agile way, if we’re going to take the pace and scale of action that we need to take,” she said. “And there is a danger that we’re relying too heavily on technological changes, such as electrification, which is being billed as the saviour of us all and resolve all of our problems, when, in fact, behaviour change will actually be the key to getting us where we need to be.”

She added: “We’re an innovative species but we’re also very contradictory – we will often behave in ways that go against our knowledge and beliefs. I think we’ve seen that very clearly with Covid, and we need a lot more focus on how the behaviour changes will come and how they’re going to combine with technology.”

Accountability at different levels will be very important, as well as to focus on upstream rather than the downstream factors. “We need to stop focusing on taking carbon out when it’s up there [in the atmosphere],” she noted, “and think instead about how to not put it up there in the first place. That’s a key mental shift that we need to make.”

Arguing that citizens are by far our biggest and most underutilised resource, she called for ways to unleash the champions in our communities and empower them through things like data monitoring, collection and analysis.

Overcoming the polarisation and management of information, and fragmentation in society are major challenges, particularly when many different groups of people receive and consume information from so many different sources. “How can we return credibility in the role of science to the discourse, and have unifying, cohesive discourses that bring people together, rather than pushing them apart?” she asked.

These drivers for change – around ensuring accountability and transparency at the top and at other levels, while harnessing citizen power from the bottom up – flow into a key question, posed by Prasad. That is, given the urgency and magnitude of the challenges we face, do we really have time to build such coalitions?

Dora is adamant that we do, and that bottom-up change is the best approach to deliver the type of change needed. “At the international level, you end up with the minimum of what’s in agreement,” he said. “But at the local level you can have more disagreement, more variety, and more diversity that is acceptable. For example, through participatory budgeting, you can unravel who is benefiting and who is not.”

Summing up, Prasad said he hoped that our fundamental values, including the wellbeing of everyone and the wellbeing of other species, will triumph. “And my biggest wish from COP26,” he added, “is that we stop seeing this as the aversion of a catastrophe but, actually, start seeing it as the possibility of building a far better world with far better livelihoods, lifestyles and opportunities.”

Organised by SALUS Global Knowledge Exchange in collaboration with The Helen Hamlyn Centre for Design, Royal College of Art, the Healthy City Design 2021 International Congress & Exhibition will be held from 11 – 14 October 2021.